I’m nervously stroking a $77,000 check to Tesla, thinking, "We’ve got to start placing some big bets. We’ve gotten as far as we can on grit."

It’s 2017, and my company has been growing 200% each year since its inception. But I feel we can become a dominating force in our market — if we take bigger risks.

I am a European Immigrant. I started my company Crisp in 2012 with $500 to my name and no investors. I was so broke I avoided going out to dinner with friends. I endured 21 failed sales pitches before finally landing my first client. I’d often work seven days a week, grinding until two to three in the morning, hustling to overcome every bad thing you can imagine happening in business.

But by 2017, we were a video marketing company with a team of sixteen.

One growth strategy we were banking on is a new referral program for our clients, and the industry-standard prize for such a program was an Amazon Gift Card. But I have a different idea.

So I went down to my local Tesla dealer and apprehensively stroke a $77,000 check. We’ll give away a Model S, I decided.

Driving the Tesla off the lot, I pushed away thoughts of failing and losing damn near a hundred thousand dollars. I had just bet a significant portion of my personal savings — and a part of me wondered if I’m out of my mind… 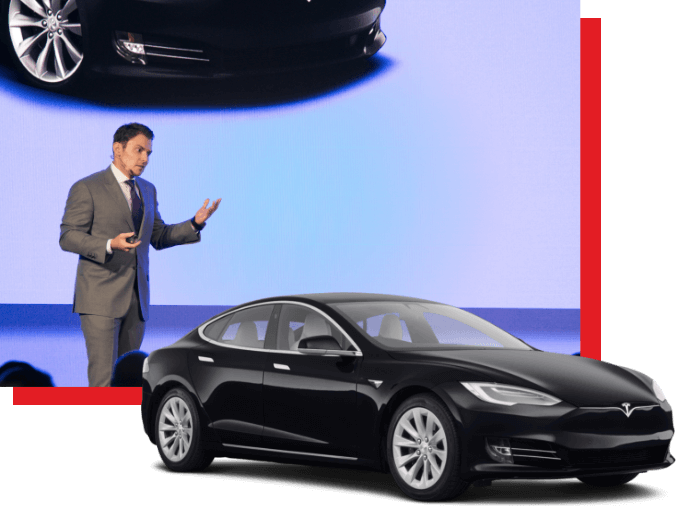 I had to remind myself that if you don’t go for it, your odds of succeeding are zero. By placing the big bet, I’d given myself and my company a chance to achieve a quantum leap. The risk weighed on me so much that I developed an eye twitch leading up the conference in Vegas where we were to give it away.

And then I upped the ante. I bought the title sponsorship at our industry’s largest conference and flew out half of our team. Our presence was huge — and expensive. I paid for a booth near the stage, our logo in the pool, our name as the WiFi password, and our brand on every napkin.

And then, after my keynote, I gave away the Tesla.

Business exploded. In the following year, we doubled our 7-figure revenue and our headcount. It was a huge turning point for us, and I realized the truth of the old adage:

A year later, I bet big again — much bigger. I was like, “Alright, let’s host our own conference.”

This time it wasn’t a $77,000 bet. It was a million-dollar bet before we sold a single ticket. We decided to give away not one, but three Teslas.

So we booked a speaker lineup that included big names like David Goggins and Chris Voss.

We decided to give away not one, but three Teslas. The enemy of your untapped potential is complacency. The antidote is courage.

Almost daily, I thought about the awful and very real possibility of our conference being a huge financial wipe-out. Some nights I’d fall asleep imagining us only selling a few tickets and having to file for bankruptcy. Did I bet too big?

But it worked. 500 lawyers attended. We also successfully launched a brand new offering in the form of our coaching program. The Crisp Game Changers Summit was instantly established as our industry’s premier event. The following year, we hosted our second conference and gave away 3 Teslas and a Ferrari — and sold over 1,000 tickets.

Between 2017 and the end of 2019, we doubled our revenue and headcount every year — and every year, we became a new company. In 2017, we were a small video company. Then we grew our way into a video marketing company, and then into a law firm growth company. Today, we’re 70 employees and growing. We’ve made the Inc. 500 List three years in a row and landed mentions on Atlanta’s Best Places to Work list.

And deeply meaningful to me is the fact that last year, more of our employees bought homes than all prior years combined.

And deeply meaningful to me is the fact that last year, more of our employees bought homes than all prior years combined.

What I’ve learned is that my deepest driver is the desire to lead by example. I want to be a source of inspiration and influence. So the greatest reward of my business is seeing our clients become market leaders who transform their companies, improve their employee’s lives, and become inspirations in their community.

I’m going to keep placing large bets that scare me as much as the $77,000 one I made with a Tesla. Here’s what I’ve discovered from taking big risks:

The enemy of your untapped potential is complacency. The antidote is courage. Michael Mogill is Founder & CEO of Crisp, the nation’s #1 law firm growth company and the author of the The Game Changing Attorney (available on Amazon).

He is also the host of The Game Changing Attorney Podcast, and founder of the Crisp Game Changers Summit (the largest law firm growth conference on Earth).

He’s helped thousands of attorneys — from solo and small firms to large practices — differentiate themselves from competitors and earn millions in new revenue.

Crisp has been named to the Inc. 500 list of America’s fastest-growing companies and has been awarded Best Places to Work.

Michael’s approach is to take everything he’s learned generating massive growth in his own organization and help the country’s most ambitious law firm owners do the same for theirs.

A sought-after speaker, Michael often presents at national conferences on innovative ways to create exponential business growth. His advice has been featured in publications such as Forbes, Inc., Avvo, ABA Journal, The Trial Lawyer, Huffington Post, and The Wall Street Journal. owners grow their revenue by $1 million+

We want the most game changing attorneys in the country to get the best cases, grow the
strongest law firms, and make the greatest positive impact in their communities.

CRISP IS THE #1 LAW FIRM GROWTH COMPANY IN THE NATION, AND HAS BEEN NAMED TO THE INC. 500 LIST OF FASTEST-GROWING PRIVATE COMPANIES IN AMERICA.

"Crisp has exceeded all of my expectations. The people that I've met there and the things that I've learned have gone far beyond anything I would've imagined. It's one of the best decisions I've ever made." “Crisp has exceeded all of my expectations. The people that I’ve met there and the things that I’ve learned have gone far beyond anything I would’ve imagined. It’s one of the best decisions I’ve ever made.”

We want the most game changing attorneys in the country to get the best cases, grow the strongest law firms, and make the greatest positive impact in their communities.

Law firms that work with Crisp see an average return on investment of 300% and a 2-10X increase in average case value.